In 1961, Major Aubrey Whitby founded Whitby and Co in Kendal with a small range of Italian made pocket knives and kitchen woodware items, mainly aimed at the hunting and shooting market. Major Whitby found that his simple formula and belief in a company built on strong foundations of quality, value and total commitment to customer service was a successful one. The range of products offered by ‘Whitby Knives’ as it was then known, grew rapidly with multiple knives designed and manufactured under this brand, all receiving the Whitby stamp denoting quality.

Sadly, Major Whitby died suddenly in 1974, leaving behind a thriving business in need of new leadership. As a consequence, his ‘right-hand woman’ Pauline Griffiths embarked on pursuing her own dream of purchasing the business and keeping the Whitby tradition alive. This process was not an easy one, with Pauline encountering old fashioned local bankers when looking for finance to help to support the purchase of the business. It was the 1970’s and women in rural Westmorland (as the County was known then) were rarely involved in serious business matters, even more so if they were married and had a family! However, Pauline’s drive and persistence eventually paid off, with the necessary finance in place in 1976, Whitby and Co moved into the ownership of the Griffiths family.

From this point Pauline and her husband Michael committed themselves to grow the business by forging alliances with new suppliers, and opening new outlets for the growing range of products, all the while working hard not to forget Major Whitby’s axiom of ‘Quality, Value and Service’.

From an early age their son’s Nick and Tim played a growing part in the family business until, after leaving school, they joined the business full time in the early-mid to late 1980’s.

By now Whitby and Co had moved from rented premises and had purchased The Old Fire Station nestled beside the River Kent in Kendal. The business enjoyed 20 successful years at the Old Fire Station taking on more high profile brands such as Wenger Swiss Army Knives and (the then unknown) Leatherman Multi-Tools to complement the other quality knife brands such as Puma from Germany and Opinel of France.

In 1998 Pauline sadly died after a short illness, leaving Michael, Nick and Tim to pick up the reins and to continue to move the business forward. Since then the business has continued to grow and remain successful, acquiring even more new and exciting products and brands in the last few years.

As Whitby and Co marked the millennium it was clear that The Old Fire Station could no longer contain the ever-growing business and so Aynam Mills, a much larger three-storey Victorian Mill was purchased and swiftly custom converted for the business to move into, which it did in 2001. This boosted the available floor space for offices, warehousing and warranty facilities from 6000 square feet to an impressive 21,000 square feet.

In 2011 the Company celebrated its 50th Anniversary and to coincide with this event re-branded the company to reflect a modern and innovative look whilst staying true to its roots. 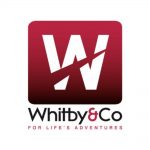