Incognito®’s Zap-Ease instant bite relief is the simplest, most effective, harmless way of stopping the itch, for the times that you forget to apply an Insect Repellent.

Incognito®’s Zap-Ease instant bite relief is the simplest, most effective, harmless way of stopping the itch, for the times that you forget to apply an Insect Repellent.

‘Clicking’ the Zap-Ease several times around the area of the bite has the effect of localising the poison and inhibiting the histamine release which causes the itch and the urge to scratch. The toxicity of the mosquito bite becomes neutralised, with no harmful effect on the surrounding skin, thus stopping the customary inflammation and unsightly swelling. Suitable for mosquito and other insect bites, jellyfish stings and nettle stings.

Zap-Ease is completely safe for the human body and incredibly effective treatment for insect bites. Being extremely lightweight and compact, it is the perfect companion for travelling trips. Finally, there is no GM, and Incognito products are never tested on animals! Suitable for mosquito and other insect bites, jellyfish stings and nettle stings

incognito® was born because both of the co-founders experienced first hand the downsides of using synthetic insect repellents. Howard contracted malaria then dengue within a year of each other (in Thailand and India) while using Deet and taking anti-malarial medication. Meanwhile Patricia was on holidays on a trip to South America, she took Deet and a natural repellent. Patricia found herself unwilling to use Deet because there was no water treatment facilities in the middle of the Amazon where she was staying and it was so incredibly beautiful there it felt wrong for her to use such a toxic substance. But the natural repellent she took did not work so well. Patricia and Howard then co-founded incognito®; a natural insect repellent that worked, with the ethos of not harming the wearer or the environment. Incognito® to make you invisible to mosquitoes. 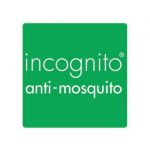